Disney on Ice Mickeys Search Party tickets are now up for grabs and they are selling like hot cakes. The newest sensation in town for kids will be an amazing adventure full of world-class skating and phenomenal stunts. ‘Disney on Ice Mickeys Search Party’ will bring all the fun closer to Disney audiences than ever before. With lots of new faces in the cast, the show is expected to be a truly spectacular event for the entire family. Don’t miss out on it! 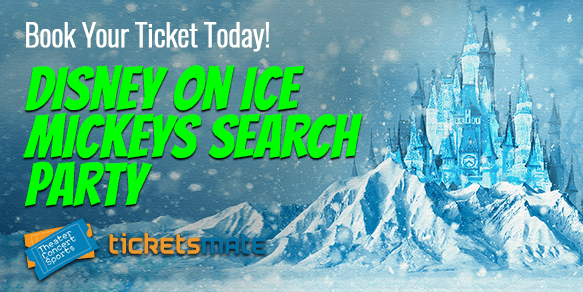 Disney on Ice Mickeys Search Party with a compelling storyline keeps audiences glued to their seats. As each scene unfolds before your eyes, you will get a truly mesmerizing experience unlike anything you have seen before.

Disney on Ice: Mickey’s Search Party will be hitting the road in 2018 and will continue to play in different cities across the country till early 2019. Even though you would have plenty of opportunities to catch the show live, you ought to make arrangements early on because of the popularity of the show.

The production will travel to the Amway Center in the fall of 2018 before moving on to the famous BB&T Center in Florida for a series of shows. Following this, the show will play at the Germain Arena in Florida and then at the American Airlines Arena in Miami. After the Florida run wraps up, Disney on Ice: Mickey’s Search Party will begin playing at the Eagle Bank Arena in Virginia in October 2018.

Other venues you can catch the brand new Disney sensation at include Barclay’s Center, Giant Center, Greensboro Coliseum, Nassau Veterans Memorial Coliseum, Bankers Life Fieldhouse and the DCU Center, among others. As the tour continues on into 2019, you will have countless opportunities to catch the show – so don’t miss out!

Disney on Ice: Mickey’s Search Party – About the Show

The show, which promises to be one of the best by Disney, will open with a scene at the beloved Club Mickey Mouse, with Mickey and Minnie taking the lead. It will eventually take the audience through a ride down the memory lane with scenes and settings from movies such as Beauty and the Beast, Peter Pan, Frozen and The Little Mermaid. Other favorites you will be able to catch on the stage are Maui, Moana and Miguel from Coco! As these new Disney favorites dance across the stage, you are bound to feel the electric atmosphere with a level of energy you have never experienced before.

Talking about this production of Disney on Ice, the executive vice president and producer, Nicole Feld said, "We have pushed the action past the ice, expanding the stage beyond our traditional surface. The excitement will not only happen in front of fans, but all around them with characters emerging from the stands in unexpected places for one-on-one delightful moments."

With such words from the top, you can imagine how truly phenomenal this show is expected to be.

Get ready for an unforgettable experience!

Disney on Ice: Mickey’s Search Party uses a lot of interesting techniques to make the show distinct and enjoyable. There is video projection creating the world of Arendelle and extreme skating stunts by the ice harvesters in Frozen. The famous chandelier from Beauty and the Beast comes to life and along with Belle and the other enchanted objects, turns into a carousel in an amazing display of aerial skills. Miguel from Coco, ends up in a world full of color as skeletons on top of sway poles swing over the audience as part of the celebrations.

Disney On Ice has become a worldwide phenomenon for people of all age groups. Ever since its international debut in Japan with Happy Birthday Donald in 1987, it has produced a new show annually. Mickey and the gang are now back with another exciting creation – Mickey’s Search Party. It will hold a residency at Los Angeles’ Staples Center this holiday season.

A:Disney on Ice's famous production, Mickey's Search Party will be held in Boston on February 15, 2020. There, the show will continue to run till February 17, 2020. So, if you are interested in watching this exhilarating spectacle live then buy your Disney On Ice Mickeys Search Party tickets from our registered brokers today.

Q:How much are Disney on Ice Mickeys Search Party Tickets for?