Let the games begin! This summer opens up with the 2014 FIFA World Cup, hosted by Brazil. Greece tickets are now open for sale for their exciting soccer games scheduled against Columbia, Japan and Côte d'Ivoire. As soccer’s biggest spectacle get’s ready to kick off, Brazil will be flooded with  hordes of passionate soccer fans from all over the world. Bring your enthusiastic sports buddies along to enjoy the games. Greece has won some glorious victories over the years. They won the European Championship in 2004 and were named as the ‘World Team of the Year’ by World Soccer the same year. In 2005, the team was awarded with the FIFA Fair Play Trophy and Laureus World Sports Awards as well. 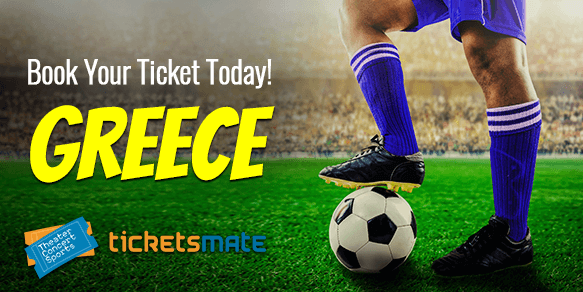 Of the  Head Coach of the team is  Fernando Santos and  the team plays their home games at Karaiskakis Stadium. Greece is the only team out of the nine national teams to win the European Championship. This victory has been followed by numerous qualifications for the finals. The thriving team reached the quarterfinals of Euro 2012.

In order to make it to the 2014 World Cup in Brazil, Greece had to face some fierce competition. The team contended against the likes of Bosnia, Slovakia and Lithuania. Throughout the qualification campaign, Greece put on strong performances, and narrowly missed topping their group on account of goal difference. As a result, Fernando Santos’ men were pitted against the Romanians in the play-offs, for a place in the World Cup. After a tough two legged tie, the Greeks emerged 4-1 winners and proceeded to book their place in the World Cup.

Captain Giorgos Karagounis is known to be the dominant figure in the Greek line-up whereas forward players such as Mitroglou and Dimitrios Salpingidis play significant roles by providing Santos with distinct attacking options. Other notable performers in the team are Theofanis Gekas, Dimitris Papadopoulos and Sokratis Papastathopoulos.

Get ready for quality soccer action this year, as the best teams in the world converge in Brazil for soccer’s biggest spectacle. As the FIFA World Cup 2014 kicks off, stadiums will be flooded with thousands of spectators shouting and hooting to support their favorite team. Wouldn’t you want to show your enthusiasm for your favorite sport? I bet you do. Hurry up and join the legion of enthusiastic fans by getting Greece tickets at your earliest. You wouldn’t want to sit this one out.

A:Greece and Japan have played each other once before and that resulted in a win for the Asian nation. Greece however upset the odds in 2004 to win the European Championship so they will not be taken lightly by any team either. We now have Greece Tickets available at prices that are ranked among the best available anywhere in the market. Log on to our website, make your way to the relevant event's page there and follow a few simple steps to book your tickets in no time at all.

Q:Is it safe to purchase Greece Vs. Cote DIvoire 2020 Match tickets from your website?

A:Greece stunned the whole world when they won the Euro 2004. So the team has the capacity to pull off an upset win against any opposition. This is the first world cup meeting between these two sides and it will be interesting to see what ensues during the encounter. It is perfectly safe to purchase Greece Tickets from our website. We have been certified as safe by leading internet regulatory authorities, and our website complies with all the rules and regulations that a world class ticketing site is expected to follow. Please rest assured that any transactions you make with our website will be perfectly safe and secure.

Q:Are Japan Vs. Greece Tickets available at your website?

A:Yes Greece tickets are available and currently being sold at our website. You can check for the availability of tickets by simply going to the relevant event page on our website. In case tickets are no longer available, you can leave us your email address or contact details, and we would be happy to let you know if new tickets do become available.

Q:How much are Colombia Vs. Greece Tickets priced at?

A:We are offering different prices for Greece Tickets and that is because we want to ensure you have the freedom to book your tickets at prices that suit you the most. Log on to our website, make your way to the event's page there and follow a few simple steps to book your tickets in just a matter of a few minutes.

Q:What are the best Greece Tickets prices you are offering?

A:The best prices are always the ones that you want to pay for your tickets. As far as Greece Tickets go, we have them available at prices that are among the most flexible in the market so that you can book your tickets without going out of your budget. Log on to our website, make your way to the event's page there and follow a few simple steps to book your tickets in just a matter of a few minutes.