For the Detroit Lions, the 2021 season is a rebuilding one. The team has a strong offensive line and under new head coach Dan Campbell it is shaping up to be a tough team. Jared Goff is looking to revitalize his career and with veterans like Tyrell Williams and Breshad Perriman it will be a tough squad. Amon-Ra St. Brown will also be on the lookout for an opportunity. Fans can count on an interesting season from the Lions. They might be going through a bad patch at the moment, but things are not going to remain the same. Expectations are running high; buy Detroit Lions football tickets to see how the team performs in the upcoming fixtures. In their golden time, they have won the NFL Championship four times in the mid 1900s. They could repeat the same performance in the future as well if they just get a bit of luck. With their new offensive lineup and new head coach, things can surely go their way if all the players give it all they got. 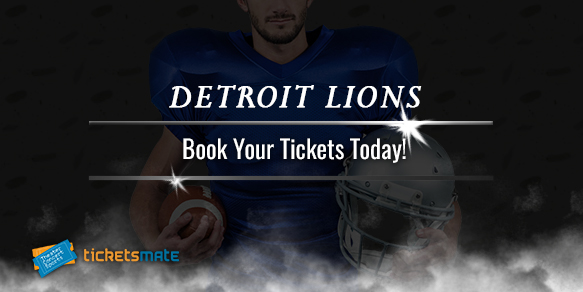 Detroit Lions is one of the most exciting professional football teams to come out of Detroit. Even though the team is yet to qualify for Super Bowl, it still is a tough competitor for the playoffs. The fans of the team too have not lost hope in their team as they stand behind their talented boys just like they did back in the good days. It is this support that will surely bring the team back up in the near future. Clad in Honolulu blue, black and silver, the team of Detroit Lions has definitely made the city of Detroit proud on numerous occasions. They have won the Division Championship four times. They have also managed to win 4 Conference Championships as well as four League Championships. That is to say that the team sure does posses the talent or the level of brilliance which is required to win big trophies. All it needs is a bit of luck and hopefully, they would be back on the winning track.

The Detroit Lions were initially called the Portsmouth Spartans. The franchise was founded in Portsmouth, Ohio before moving to Detroit, Michigan. The Portsmouth Spartans played as an independent team so most of the hired players too were players from other defunct teams. The team got a fantastic start when they won two games in a row against the Ironton Tanks. They got off to a magnificent start for their first season. Even though the Spartans were doing great on the field but the team just could not generate decent revenue because of the Great Depression and was moved to Detroit. That is when they changed their name from Portsmouth Spartans to Detroit Lions. With the help of Detroit radio executive George Richards, the Lions managed to play its first season as part of the NFL in 1934.

The team plays all its home games in the Ford Field, which has been the home of the Lions Since 2002. This is the field that has seen many a celebrated victory for the Lions. To date, the Detroit Lions have made fourteen appearances in the playoffs. But unfortunately, they have not managed to proceed to the Super Bowl even once. However, they did manage to win other prestigious titles like the NFL West in 1935, NFC Central in 1983, 1991 and 1993. The 1990s were the best time for the team because they won 2 Division Championships during that period. The team has not had that much luck in other fields so far but their past history speaks of their glory. The team has won four League Championships, 3 of which came in the 1950s.

The Detroit Lions would be entering the field with a rejuvenated spirit this time around since the squad has been revitalized with a young talented lineup. They have got the support of their fans behind them and a new strategy which, if used probably, can do wonders for them. All the Detroit Lion fans have faith in their team, which is why year after year, they lineup to buy Detroit Lions tickets.

The Bears and Lions have been one of the longest running rivalries in football, with the two teams playing against one another at least once since the 1930s. Back then, the Lions were known as the Portsmouth Spartans. The Bears have had the upper-hand so far, as the bears have won 55.8% of the games between the two teams and they seem to have a winning streak in the 2017 season as well. The Lions have everything to prove and a chance to even out the playing field. Their fans are rooting for them, so let’s see if they can live up to their expectations.

The Lions became instant rivals of the Vikings when Minnesota entered the league in 1960. While there have been ups and downs in their winning streaks in their early years, in recent history, The Lions and Vikings have been split right down the middle. From 2010-2016, they have won exactly six games each and their fans are now indecisive as to who will come out on top in 2017. There is a certain predictability that has become attached to this rivalry, that it will always produce a competitive game. However, fans cannot predict which way the tables will turn in the current football season.

The Packers vs. Lions is a rivalry that keeps on giving. It is strange at first why the Lions’ fans are so pumped about this rivalry since they have repeatedly lost to the Packers since 1991. However, that is perhaps what keeps fuelling the fans. The games are engaging simply because the Lions put up such a good fight, that one can’t tell which way the game will turn until the very end. Since 2010, though, it seems as though the Lions are catching up as they have leveled the competition by 3-3. During this time, the Lions have ended they Thanksgiving losing streak (in 2013) when they faced the Packers in Chicago City. While the Packers seemed to be winning at first, the Lions turned the game around and won 40-10.

This is one of the strongest rivalries in the NFL and all eyes will be on these teams when they meet in the 2017 season.

What year did the Detroit Lions go 0-16?

How did the Lions get their name?

Initially known as the Portsmouth Spartans, the team was bought by Detroit businessman George Richards who rebranded it the Detroit Lions after the already-famous baseball team Detroit Tigers.

Do the Detroit Lions play in a domed stadium?

The Detroit Lions’ home-stadium, Fords Field, is a permanently-domed stadium to avoid Detroit’s harsh winters and constant rain from making the game unpleasant for the spectators.

Where did the Lions play before the Silverdome?

Before moving to the Silverdome, the Detroit Lions played at the Tigers Stadium, home to the Detroit Tigers.

The Detroit Lions have beaten the Green Bay Packers at the Lambeau Field for the first time in quarter of a century. The Lions’ Lambeau Field jinx is well and truly over after they came out victorious 30-17. In the grand scheme of things, this was a tough loss to take for the Packers who have now lost three games on the bounce since Aaron Rodgers injured his collarbone. On the other hand, the Lions’ victory was a welcome boost for them as they had lost the last three games.

The average ticket price for Detroit Lions tickets is $69.00.

Available Detroit Lions Tickets till today are 47 with 222141 seats available.

How much are Detroit Lions Tickets for 2021?

Do you offer premium tickets for Detroit Lions ?

Some of the premium tickets for Detroit Lions are in Atlanta, GA on Sun, 26 Dec 2021. Often these are front row or floor seat tickets, best available (VIP) seats. These seats are in section S185 with 1 seats available at $12305 .

How to get discount on Detroit Lions 2021 tickets?

You can use the promo code "PROMOEVDT3" to get 3% discount on your purchase of Detroit Lions tickets.

No, Detroit Lions tickets are non-refundable.

How long before the event can I buy Detroit Lions tickets?

You can buy Detroit Lions even on the day of the event, subject to availability. However, it is usually better to book tickets early since seats are limited and prices sometimes rise just before the event. We have 222141 available tickets for Detroit Lions till the date Sun, 9 Jan 2022. Some of the cities where Aerosmith is performing are: Atlanta , Chicago , Detroit , Green Bay , Inglewood , Minneapolis , Seattle , Cleveland , Denver , Pittsburgh.

Buying verified tickets is extremely important. If you are looking for Detroit Lions tickets, make sure you buy them from trusted sources. Book tickets from sellers who offer 100% money back guarantee and are popular vendors.