R&B singer Sabrina Claudio plots a headlining tour. The year is a busy one for the Puerto Rican/Cuban singer as she has multiple stints planned ahead. Her upcoming fall tour dubbed The Truth Is Tour kicks off September 21 with a concert at The Wiltern in Los Angeles. The trek comes to an end on November 8 in San Diego, CA. After this the songstress will go overseas to Europe to entertain fans with her chilled-out, hypnotic melodies. Other than this, the rising star also has concert dates from June to September. She will be joining The Weeknd on the After Hours Tour as a special guest along with Don Toliver. Catch her on her upcoming concerts with Sabrina Claudio tickets. 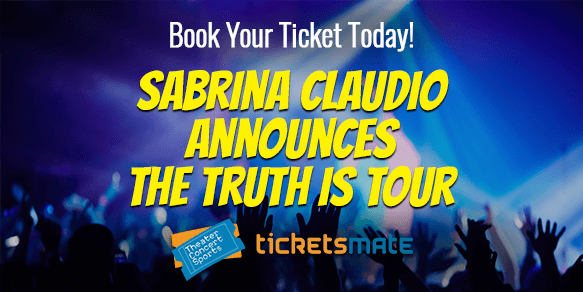 Sabrina Claudio is a new name in the music industry having launched her career in 2016. In just about four years she has made quite a mark with her breathy, velvety vocals that leave the listener totally mesmerized. Her chart-topping numbers are testament to her star power. Fans love her unique relaxed music, laid-back beats and sensual lyrics. Claudio says that she writes about experiences of others and works best when she has no distractions. Writing songs is her therapy and she loves expressing through them. The prolific international headliner is enjoying a lot of attention and she says she isn’t surprised because she always imagined it happening for her and worked hard towards the goal.

Claudio released her second studio effort titled Truth Is on October 4, 2019, via SC Entertainment that is being received well by fans and critics alike. The 38-minute new project features intimate ballads. The theme and lyrics revolve around betrayal, sensual envy, and faithfulness. The effort comes after her 2018 debut album No Rain, No Flowers.

The Truth Is Tour

The rising R&B star is ready to take her new work to road and share her songs with fans across the world. The Truth Is Tour is named after her album and will mark the singer’s largest headline tour to date. The singer and her live band will open the fall trek with a performance on September 21. The opening concert is scheduled at The Wiltern in Los Angeles. The 39-date trek is slated to culminate on November 8 in San Diego.  Gallant will be providing support on the tour for the entire run. After her US dates, Claudio will head to the UK and European cities for a handful of concerts. It is a packed year for the young artist and the singer does not want it any other way.

That is not all that is keeping Sabrina Claudio busy this year. She is joining The Weeknd this summer on their massive After Hours tour in support of their new album that arrives on 20th March with the same name. The North American jaunt gets underway in June 11 and will go on till September 3. Claudio is the guest artist on the tour so expect a dose of fresh singles and sultry performances from her. Joining her on the tour is another support act, Don Toliver. Get Sabrina Claudio tickets to watch the young songstress live in performance.

Q:When is Sabrina Claudio going to start her Truth Is Tour?

A:The R&B megastar Sabrina Claudio is scheduled to open her Truth Is tour by playing the first show of the trek at The Wiltern in Los Angeles on September 21, 2020. Our registered brokers are currently selling the tickets at an average price of $119. So, if you want to attend the show then purchase your tickets from our registered brokers before they run out of stock.

A:The R&B star, Sabrina Claudio is currently on a promotional tour for her debut studio album, 'No Rain, No Flowers.' She plans to end the trek by playing her final show at The Ground in Miami on November 9, 2020. So, if you are planning to attend one of her upcoming shows live then get your Sabrina Claudio tickets from our certified brokers today.