Primus is a group of rockstars, an American rock band that has been playing music since the 1980s and its present lineup includes Larry "Ler" LaLonde as the vocalist and guitarist, Les Claypool as the bassist and Jay Lane as the drummer. Primus has released a number of albums and EPs which include Suck on This, Frizzle Fry, Sailing the Seas of Cheese, Pork Soda, Tales from the Punchbowl, Brown Album, Antipop, Animals Should Not Try to Act Like People, June 2010 Rehearsal EP and Green Naugahyde. The band is also best known for creating the original theme for the immensely popular show, South Park back in 1997. Primus played music from 1984 to 1997 and then reunited back in 2003 and are still performing and releasing albums to date with their latest album being Green Naugahyde. 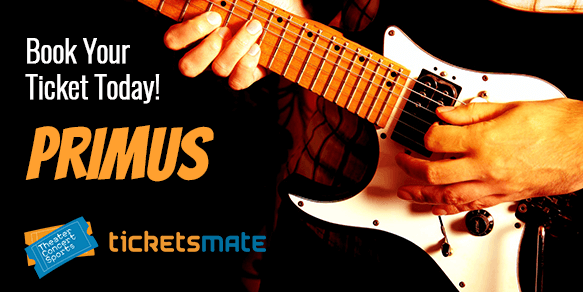 This trio of amazing rockstars saw their story begun back in the enchanting 80s when many of today’s greatest rock acts were being born, and from this same pool came Primus. Formed in El Sobrante in the State of California, within the confines of the US, of course, Primus was formed by Les Claypool who also financed the band by selling his car, a clear indication of how much this great musician was willing to go for his artistic and musical aspirations. The group was initially formed as a duo alongwith Todd Huth as the guitarist with a LinnDrum machine as the ‘drummer’. However, Vince ‘Perm’ Parker joined the band soon after as its drummer and Primus recorded its first demo tape. The band was initially formed as Primate due to clashes with a band known as The Primates and so Primate was changed to Primus.

Primus gained a large local gathering due to unique style of music termed as ‘funk metal fusion’ so much so that they had sold out venues such as at the famous Berkeley Square. The band then recorded its second demo known as Sausage followed by Primus being on hold after which Claypool hired former Possessed guitarist, Larry ‘Ler’ Lalonde to reform the band. With LaLonde, the band recorded their first album Suck On This funded by a private loan from Claypool’s father. The band then released Frizzle Fry in 1990 with popular singles Too Many Puppies and John the Fisherman after which their popularity soared. The band also made a music video and opened for Jane’s Addicition, an immensely popular band at that time. With all this popularity, Interscope Records had no choice but to sign on this fabulous group of rockstars.

The band’s first album with Interscope Records was Sailing the Seas of Cheese with two singles released; namely Tommy the Car and Jerry Was a Race Car Driver which were featured on MTV with their own music videos. The band also performed a song for Beavis & Butthead tribute album known as Poetry and Prose. This album was highly successful and achieved a gold certification in terms of sales and the band itself started touring with the greats of the 90s, U2, Public Enemy and Anthrax and numerous people all over the world grabbed Primus tickets to watch them play live alongside these great acts, with Primus not far behind. In 1992, Primus released a cover of Making Plans for Nigel by XTC, a song that charted high on the Billboard Modern Rock Tracks chart.

The year of 1993 saw the band’s next album, Pork Soda released which debuted at an astounding number seven on the Billboard Top 10. Two years later, Primus was back with Tales from the Punchbowl, an album whose song Wynona’s Big Brown Beaver received a Grammy nomination and Primus also performed at the David Letterman Show and the Conan O’Brien Show. This time marked the band’s peak of stardom making it a household name in America to the point that people were literally flocking to lay their hands on Primus tickets.

In 1996, the band composed South Park’s theme followed by Brown Album that was released the next year, an album that was highly successful. Two years later, the band released Antipop featuring great musicians such as Metallica’s James Hetfield, Limpbizkit’s Fred Durst and Rage Against the Machine’s Tom Morello. This in itself shows that this album was truly an epic artistic compilation featuring the very best in roc and metal. In 2000, the band released a cover of N.I.B, a Black Sabbath song with Ozzy Osbourne, a song that ranked second on the Billboard Modern Rock tracks. Since then, the band has continued entertaining audiences with numerous tracks and tours in a seemingly never ending journey of incredible music. To top it off, two of Primus’s albums are platinum and one gold. If you want this amazing act performing live on stage then the best deals on Primus tickets are just a click away!

Primus will embark on a road trip for their rescheduled Rush Tribute tour 2021. The trek was delayed due to the COVID-19 pandemic and now new dates for summer 2021 have been announced. Fans can note the dates and book their Primus tickets for the upcoming concerts. It kicks off August 10 in Boise, Idaho, and ends with a performance on October 25 in Phoenix. The band will be making stops at more than 40 cities. The opening act for the entire length of the trek is Wolfmother, and the Sword will be the support act for select dates. All original tickets will be honored. Singer and bassist Les Claypool is excited about the trek and so are fans. Expect to listen to Rush’s epic album "A Farewell To Kings" released in 1977 in its entirety, along with their own music.

The original lineup of Primus has returned. The trio, Les Claypool, Larry LaLonde and Tim Alexander is now ready to release their ninth studio effort for the first time since 1995’s Tales from the Punchbowl. Their upcoming album The Desaturating Seven is slated to release on September 29th. The trio is also on tour to build anticipation for their latest record. Primus is expected to play plenty of shows in main cities such as Las Vegas, Redmond and San Antonio before they end their road trip on December 30th.

Primus to embark on a tour soon

The band that has given the world memorable hits like, My Name is Mud and N.I.B, Primus is heading out on tour soon. The group plans to commence the road trip on July 17th and will be performing the first show of the trek at the Uptown Amphitheater in Charlotte. They will take the stage at many popular venues like, The Dome, Freedom Hall and Festival Pier before they conclude their summer tour in August. That’s not all; they have revealed that they are working on new music and they may come out with their latest album soon.

Nothing beats the joy of watching your favorite music artist perform live! Primus's concert dates are out and fans are looking forward to the upcoming shows. The next concert will be held in Boise at the Idaho Botanical Garden on 10-Aug-21, while the last available date is for the event scheduled for Phoenix at the Arizona Federal Theatre on 25-Oct-21. For complete information regarding dates and venues, please visit our website.

A:Yes, we are offering discounted Primus Tickets along with a good seating arrangement. Check out the instructions and place the order right away.

Q:Can you help me with where to buy tickets for primus and greek theatre from?

A:We can do better than that and actually offer your Primus Tickets at the most amazing prices in the market. Visit the pricing section of our website and book your tickets now.

Q:When will I get my primus tickets santa. cruz ca event?

A:Your Primus Tickets will be delivered as per the time conveyed when you booked them.

Q:Are there any hidden charges for Primus Tower Theater Tickets?

A:No, the price for Primus Tickets published online is final. There are no hidden charges.

Q:What if there is a change in the schedule of primus metropolis?

A:If there is a change in the schedule of the event, we'll adjust your primus Tickets accordingly.

Q:I found the primus tickets cheap, can i cancel the order I placed with you?

Q:What is the criteria to get code for primus at ogden theater?

A:There is no specific criteria to get codes for primus Tickets. Anybody can get it by following the instructions online.

Q:What is your price offer for Primus Cheap Tickets?

A:We are offering Primus Tickets with special discount offers at cheap rates. Check them at our website and place your order.

Q:What are the prices of Primus tickets Santa Cruz on your website?

A:You can get the details about ticket prices from the page of Primus Tickets.

A:Visit our Primus Tickets page for the details.

Q:I was afraid to order primus sept 24 wamu tickets as i thought i wont get them in time and will lose my money, but thank you excite for making me attend this concert.

A:You got Primus tickets in time, we earned the satisfaction of keeping our words. Do visit us again in future.

Q:I need 2 tickets for primus asheville concert, can i just pick them from the concert place?

A:Yes, will call helps you pick Primus tickets from the venue. Read FAQs to learn more about it.

Q:Do you have some primus Asheville, Nc tickets at your website?

A:We have many Primus tickets available for you at our website. Get the tickets now!

Q:Can i get 9 cheap primus tickets club Nokia and get the 10th one for free

A:You have to pay the price mentioned against the tickets you pick for Primus concert. However, you can get the discount code from the live help person and save some good amount.

Q:Are there any primus tickets Sacramento?

A:We have loads of tickets for the Primus concert in Sacramento, check them out now!