Lauren Daigle & Johnnyswim tickets are selling like hot cakes, so buy yours as soon as possible. The two-time Grammy winner is embarking on her first ever headlining arena tour and will be accompanied by the American folk/soul duo that goes by the name of Johnnyswim. The Lauren Daigle World Tour will play in arenas across New Zealand and Australia, before heading to North America on February 20th, 2020. The concerts will feature some of her biggest hits including ‘You Say’ and ‘Rescue,’ along with special guest performances by Johnnyswim. So wait no more and get your hands on the concert tickets as soon as possible because they are expected to sell out in no time. 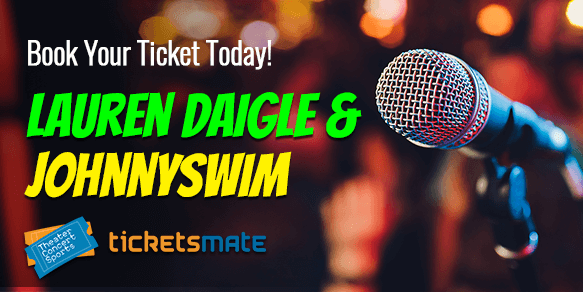 The acclaimed Christian music singer-songwriter is making her way to an arena near you, so make sure you buy your Lauren Daigle & Johnnyswim tickets at the earliest. This is a concert you would not want to miss!

Daigle released her first studio album, How Can It Be, in 2015, after landing a contract with Centricity Music. The album peaked at the number 1 spot on the Billboard Top Christian Albums chart and eventually received Platinum status. She released her second album, Behold: A Christmas Collection, in October 2016. The album debuted at the 77th spot on the US Billboard 200 charts on November 12th, 2016 and then moved up to the 29th spot on December 17th, 2016. It also debuted at the 18th position on the US Billboard Christian Albums chart, eventually climbing to the number 1 spot by the end of that year.

She released her third studio album, Look Up Child, in 2018, which debuted at the number 3rd position on the Billboard 200 chart. It climbed its way to success and secured the number 1 spot on the Top Christian Albums chart. ‘You Say,’ the lead single from this album made its way to the 29th position on the Billboard 100 chart. This album helped Daigle earn two Grammys. She has been critically praised for her music and has won several awards including two American Music Awards, five Billboard Music Awards, and seven GMA Dove Awards.

The tour will launch on January 18th, 2020, and will finally wrap up in July after playing in major markets like New York, Nashville, Minneapolis, Atlanta, and Dallas. You can expect a number of power packed performances by Daigle. Her Southern charm, raw vocal power, and stage persona will simply blow you away! She will also be joined on stage by the musical duo, Johnnyswim, who will entertain you with their soulful folk music.

Hailing from Nashville, Tennessee, Johnnyswim came to life in 2005. The duo consists of singer-songwriters Abner Ramirez and Amanda Sudano and is popular for making folk/soul music. They have released a number of hit singles, including ‘Bonsoir’ (2011), ‘Annie’ (2012), ‘Home’ (2012), ‘Hallelujah’ (2011), and ‘Good News’ (2008). You can expect their concert set list to include powerful melodies and energetic pieces, which will surely leave you impressed.

If you are a fan of Daigle and Johnnyswim’s music, then you simply cannot afford to miss out on this concert. The thrilling performances, catchy tunes, and soulful tracks will want you to dance and sing along to the infectious music. So buy your Lauren Daigle & Johnnyswim tickets soon and see for yourself what the hype is all about!

Lauren Daigle and Jonnyswim tickets up for grabs!

The multi platinum-selling Christian music star, Lauren Daigle and Johnnyswim have teamed up for a massive tour for which they will be making several stops across North America. The tour is Lauren Daigle’s World tour that kicks off September 24, 2021. Johnnyswim will be the opening act for this jaunt that ends on Nov 19. The two acts were going to hit the road in 2020, but due to corona virus, like all other artists in the music industry, they were forced to change their plans. Fans are hoping that this time they will be able to see them live in performance with their Lauren Daigle and Jonnyswim tickets. Abner Ramirez and Amanda Sudano of Johnnyswim are known for their soulful anthems through which they tell stories of love. Expect to hear their beautiful melodies along with Lauren Daigle’s chart topping numbers.