It has been over two decades since the band came into formation. Four college fellows Mark Morton, Matt Conner, Chris Adler and John Campbell started the heavy metal band in 1994 with the name, ‘Burn the Priest’ and later the band changed its name to Lamb of God. They have released 10 studio albums. The heavy metal giants, Lamb of God, have got quite a year planned for them. They will be hitting the road with Megadeth for their previously postponed trek. These two extremely talented powerhouses will be playing multiple concerts in different cities across North America. So, if you want to watch Lamb of God perform their latest material live on the road then this is your chance. Simply, get your hands on these Lamb Of God tickets and watch as they rock the stage in your city live. The trek kicks off on August 20 and continues till Oct 2, 2021. Tickets for the 2020 concerts will be honored. 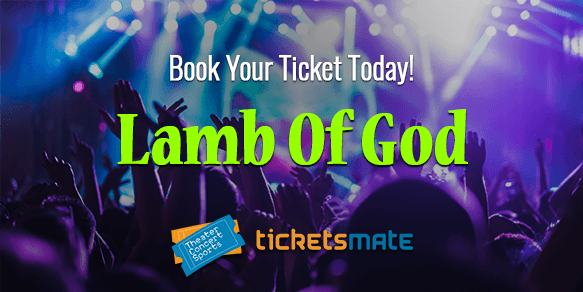 Influenced by the likes of Metallica, Slayer, Aerosmith and Machine Head, Lamb of God has accomplished many milestones throughout their amazing career. They have bagged five Metal Hammer Golden Awards including a couple for, 'Best International Band' and were also seen performing at major festivals including, Mayhem Festival, Soundwave Festival and Download Festival. They are now going to head out on tour. So, book your tickets early and enjoy their concert live.

Since their debut in 2000, Lamb of God has released eight memorable studio albums. Although all of their records were hits but there were a few that really stood out and among them one is 'Ashes of the Wake.' This effort became a huge success in North America and recorded gold sales in both the United States and Canada. It was also included in the Metal Hammer's list of, 'The 100 Greatest Metal Albums of the 21st Century.' The band then put out their follow-up record, 'Sacrament' which too was certified gold by the RIAA and MC.

In 2009, Lamb of the God came out with another great record called, 'Wrath.' It hit the second spot on the Billboard 200, becoming their highest-charting effort to date and received positive reviews from multiple publications including, NME, IGN, Rock Sound and Kerrang! It also contained songs, Set to Fail and In Your Worlds both of which got them a Grammy nomination for 'Best Metal Performance.'

Lamb of God: The Album

In early 2020, Lamb of God revealed that they will be putting out their latest eponymous studio album on May 08, 2020. They also unveiled the art cover and shared the track-list of their upcoming record. To build anticipation for their next LP, the guys have released the lead single from their effort titled, Checkmate. The group's lead vocalist Randy Blythe said this about the single during his interview with Kerrang! "It’s the most on the nose politically, but this whole record is political."

Heading Out On Tour

Lamb of God is all set to hit the road with Megadeth this summer. They will be performing their first concert in Bristow on June 12, 2020. From there, they will go on to visit many cities before ending the trek on November 13, 2020. So, if you want to watch them in their element live then grab Lamb Of God tickets.

Lamb of God concert 2021 is all set to take place this summer. Megadeth and Lamb of God had rescheduled their co-headlining North American tour to 2021. The massive 55 date outing “The Metal Tour of the Year” also featured Trivium and In Flames. Now the tour has been narrowed down to be a 42 date summer trek. It kicks off on July 9th in Detroit, Michigan, and will continue all through the summer till September 10 with the final show in Las Vegas. Those who have Lamb of God tour 2021 tickets can hold on to them a little longer, if they wish to see the metal bands live in concert. All purchased tickets will be valid for the new dates. Get ready to join the music party and see them rock it like never before.

Yes, Lamb of God is back on the road! Start planning your concert day because now things are getting back to normal. Old postponed treks are happening and so is the massive co-headlining tour dubbed "Metal Tour of the Year," that featured Lamb of God and Megadeath. Two of the biggest bands in heavy metal had planned this North America excursion for 2020, but Covid paused everything. Now they are making a comeback and as was the plan before they will have Trivium and In Flames as their support acts. So catch the historic and not-to-be-missed shows with Lamb of God tickets. The trek kicks off August 20 and wraps up on October 2, so all you fans have plenty of dates to plan your day and see the heavy metal titans live. All tickets purchased for the 2020 dates will be honored.

How to Buy Lamb Of God Tickets?

Nothing beats the joy of watching your favorite music artist perform live! Lamb Of God's concert dates are out and fans are looking forward to the upcoming shows. The next concert will be held in Austin at the Germania Insurance Amphitheater on 20-Aug-21, while the last available date is for the event scheduled for Quebec at the Centre Videotron on 2-Oct-21. For complete information regarding dates and venues, please visit our website.

Lamb Of God Other Events