Formed in 2005 in Nashville, Tennessee, Johnnyswim is a folk, blues, soul and pop music duo consisting of Abner Ramirez and Amanda Sudano. The two first met after a Sunday service at a local church in Nashville. Four years after this initial meeting, the two came across each other in 2005 when Sudano attended a workshop for songwriting held by Ramirez. This is where the two developed a joint interest in working together and writing songs to create music as a duo. The two are still going strong in their endeavors. If you want to find out what makes them so unique, you ought to get your hands on these Johnnyswim tickets at the earliest. 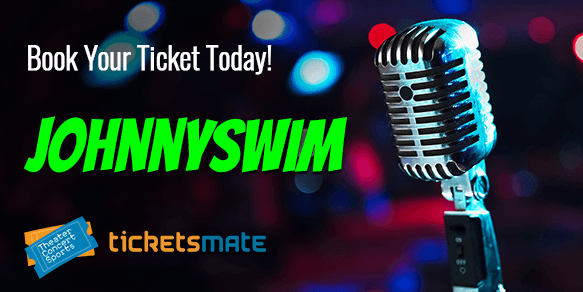 Johnnyswim will be performing at a number of venues across the country, starting with August 2017 and going on all the way till November 2017 – you don’t want to miss out on this!

The Career of Johnnyswim

Johnnyswim released its first EP in June 2008. This was a self-titled work that managed to get the band some traction in the music industry. This was followed by a 2009 release, where the duo worked together with Bruce Sudano on a track called “Morning Song” that appeared on the record Life and the Romantic. In the following year, the band released another EP, called 5-8. Following the release of this EP, the duo toured around the country and managed to gain quite a lot of fame.

In 2011, the duo released a single called “Bonsoir”. In the same year, the duo then travelled to India and wrote “Hallelujah” after being inspired by their experiences in the country. The single was released in December of 2011 and all profits from it went to charity.

In 2012, the band started working on a new album. The album, called Home, Vol. 1 was released on 24th April 2012. This album, along with the fresh new single “Annie” helped the band receive quite a lot of support from major brands such as Tommy Hilfiger, Louis Vuitton and Apple.

Soon, the fame started to take the unsigned duo to new places. They were guests on a live radio variety show called, A Prairie Home Companion. Johnnyswim also made an appearance on The Late Late Show with Craig Ferguson and The Tonight Show with Jay Leno in 2013.

Finally, in 2013, the duo signed a formal recording contract with Big Picnic Records. In 2014, Johnnyswim released their first full-length album called Diamonds. This album proved to be a mega success for the duo as it held the number one spot on the singer/songwriter chart for several weeks.

In February of 2014, the duo was invited as guests on the program, Live From Daryl’s House, as they joined Daryl Hall to perform seven songs, with support from the house band.

The duo is all set to bring its magic to your town. You need to grab these Johnnyswim tickets at the earliest if you want to catch these talented individuals live in action. They will be playing at a variety of venues all across the country starting with The Imperial in Vancouver on 31st August, 2017. This would be followed by performances at the Mcmenamins Crystal Ballroom, The Fillmore, The Novo in Los Angeles, the House of Blues in San Diego, the Ogden Theater in Denver, the Majestic Theatre in Dallas, Emo’s East in Austin, White Oak Music Hall Downstairs in Houston and so on. The duo will also be travelling to North Carolina, Florida, New York, Pennsylvania, Massachusetts, Washington, D.C., Georgia and Alabama. If you happen to be in or near any of these locations, you must get your tickets for Johnnyswim at the earliest.

Personal Life of the People behind Johnnyswim

Amanda and Abner, the two people behind Johnnyswim got married in 2009. At a 2014 concert in Portland, Oregon, they announced that they were expecting their first child. In February of 2015, Amanda gave birth to their son, Jaoquin Emmanuel Ramirez. The pair currently resides in Los Angeles, California.

The singers behind famous songs such as “Heart Beats”, “Away I Go”, “You’re Not Gonna Leave Me Here”, “Why’d You Do It”, “Morning Song”, “Adelina” and “Annie” are all prepared to perform for their fans. Their soulful sound will have you swinging with joy in no time. So make sure you do not miss them this summer, as they go on tour.

Johnnyswim will be embarking on a tour along with two-time Grammy Award winner Lauren Daigle, visiting several cities across America. The trek is Lauren Daigle’s World tour and Johnnyswim will be the support act for the entire length of the tour. The trek was initially scheduled for 2020 and had to be carried forward due to the ongoing pandemic and safety concerns. Now the new dates have rolled in and according to them the tour kicks off Sep 24 and continues till Nov 19. The Nashville-based duo Johnnyswim consists of husband and wife, Amanda Sudano and Abner Ramirez who married in 2009. It will be a treat for fans to see Lauren Daigle and Johnnyswim share the same stage to give fans a memorable time. Get Johnnyswim tickets to listen to their soulful anthems in a live performance.

How much are Johnnyswim tickets for 2021?

You can check the prices of Johnnyswim tickets 2021 from our website. The highest ticket price right now stands at $723.00. while the lowest is $27.00.

When do Johnnyswim Tickets go on sale in 2021?

Johnnyswim Tickets are available right now till the date Thu, 28 Oct 2021, depending on inventory. We have 2472 Johnnyswim tickets available today. Book yours at the earliest to watch your favorite band live in concert.

How to buy cheap 2021 Johnnyswim Tickets?

You can buy cheap 2021 Johnnyswim Tickets from our website. All you have to do is log on to the event’s page, go through the ticket’s prices, and follow a few simple steps to get your tickets. Cheapest Johnnyswim ticket available is of $27.00.

Do you offer premium tickets for Johnnyswim concerts?

You can check the available tickets on our website. Go through the list in detail and select the tickets that fit your budget.

How to get discount on Johnnyswim 2021 tickets?

You can use the promo code "PROMOEVDT3" to get 3% discount on your purchase of Johnnyswim concert tickets.

No, Johnnyswim tickets are non-refundable.

How long before the concert can I buy Johnnyswim 2021 tour tickets?

You can buy Johnnyswim 2021 tour tickets even on the day of the show, if they are available by then. However, it is always better to book tickets early since seats are limited. We have 2472 available tickets for Johnnyswim till the date Thu, 28 Oct 2021.

How to Buy Verified Johnnyswim tickets?

Buying verified tickets is extremely important. If you are looking for Johnnyswim tickets, make sure you buy them from trusted sources. Book tickets from sellers who offer 100% money back guarantee and are popular vendors. People who have bought tickets and attended events can be a good source of information as well when it comes to trusted sellers. In short, always be careful of online scammers and do your homework before you book tickets for an event.

How to Buy Johnnyswim Tickets?

Nothing beats the joy of watching your favorite music artist perform live! Johnnyswim's concert dates are out and fans are looking forward to the upcoming shows. The next concert will be held in Newport at the PromoWest Pavilion at OVATION on 30-Sep-21, while the last available date is for the event scheduled for San Francisco at the The Regency Ballroom on 28-Oct-21. For complete information regarding dates and venues, please visit our website.