Three iconic rock bands, including one with a “Bad Reputation” have announced a North American trek. Aptly titled, the “Rock Hall Three for All” tour will feature Joan Jett & the Blackhearts, Heart and Cheap Trick and so far they have announced concerts on 31 dates. Celebrating the Rock n Roll Hall of Fame status of Joan Jett & the Blackhearts who got inducted in 2015, the touring extravaganza will also honor Heart who got the nod back in 2013 and Cheap Trick will be receiving one at the 2016 ceremony. It has been a busy year for Joan Jett as she was last seen touring with The Who and now this 3-month trek. The increasing sales of Joan Jett tickets clearly show that the fans can’t get enough of the Queen of Rock n Roll. Catch her live as she proves yet again why she’s one of the world’s best rock guitarists. 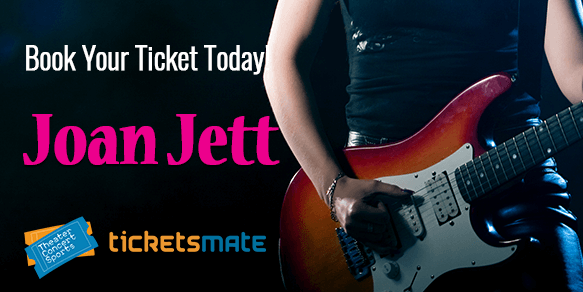 A feisty musician, Joan Jett entered the industry as a teenager and has remained at the top of the rock pile for the last 41 years. She showed the world that a girl can do it just as well as the boys, and announced her arrival in the music scene as a badass rockstar with a perfect swagger. Presenting the fitting image of a rocker – short punk-style hair, tight leather pants and smoky eyes, Joan has been an inspiration for many aspiring female rock artists. Her unique brand of punk rock is packed with fierceness, defiance and danger, exploring the darker side of life. A phenomenal singer and guitarist, Joan Jett was inducted into the Rock n Roll Hall of Fame in 2015 along with her band, immortalizing her rock anthems “Bad Reputation” and “I Love Rock n Roll”.

Along with the other legendary rock acts, Cheap Trick and Heart, Joan Jett is also celebrating her success in the industry with a 3-month tour. The “Rock Hall Three for All” trek will bring these rock icons on one platform, encouraging fans to buy their Joan Jett tickets in advance. The 31-date summer extravaganza will kick off on July 14 from Clarkson and the final concert is scheduled for September 23 at the Perfect Vodka Amphitheatre in West Palm Beach.

Joan Jett Showcasing True Devotion To The Spirit Of Music

Jett’s passion for music and rock n roll does not just revolve around loving the genre – in fact she honors it. Her motivation has remained consistent in her four-decade career as she has pursued the craft for the right reasons. Hailed as the American rockstar, Joan Jett has been honored with different titles such as the “Queen of Noise”, the “Godmother of Punk” and the “Original Riot Grrrl”.

Her first solo album came out in 1980 but was re-released in 1981 with the new name “Bad Reputation”. Making it to the Billboard 200, it spawned hits like “You Don't Own Me”, “Bad Reputation”, “Shout” and “Do You Wanna Touch Me (Oh Yeah)”. Her second album “I Love Rock n Roll” was an even bigger success, featuring hard-hitting beats and powerful vocals. Produced with her band The Blackhearts, it peaked at number two position on the Billboard 200 and the title track topped the charts in multiple countries. Other popular singles from the album include “Summertime Blues” and “Crimson and Clover”.

Finding fame as a hitmaking machine, Joan Jett has given rock fans plenty of songs to enjoy like “Cherry Bomb”, “Activity Grrrl”, “I Hate Myself for Loving You”, “Love is Pain” and “Have You Ever Seen the Rain”. Jett’s last album came out in 2013 but she’s been performing live quite regularly. Along with her band, the firecracker diva brings explosive energy to the stage while driving her classic anthems. Her concerts always witness a jam-packed crowd as she treats them to pretty much everything – riffs and licks, sweet and sour as well as pounding beats. Don’t miss Jett’s bombastic brand of rock this season.

If you are awaiting the Joan Jett Tour 2021, then you can get their tickets for The Stadium Tour. The massive rock tour featuring Def Leppard, Mötley Crüe, Poison and Joan Jett & the Blackhearts was scheduled for 2020 summers before the Covid wave spoiled all plans and tours were cancelled everywhere. Mostly the tours were rescheduled for 2021 and now the time is here. The excitement for the big rock bash hasn’t died down, in fact people are more desperate to attend a live performance like before. The only dates that Joan Jett has in 2021 are the ones with The Stadium Tour. So if you have Joan Jett tickets, you better hold on to them to see your favorite star when she takes the stage next and gets everyone up and grooving. One thing that is for sure is that whenever the show happens, you can expect a killer performance from the rock star.

How to Buy Joan Jett Tickets?

Nothing beats the joy of watching your favorite music artist perform live! Joan Jett's concert dates are out and fans are looking forward to the upcoming shows. The next concert will be held in Nashville at the Ryman Auditorium on 8-Aug-21, while the last available date is for the event scheduled for Reading at the Santander Performing Arts Center on 21-Nov-21. For complete information regarding dates and venues, please visit our website.