Disturbed is an iconic heavy metal band that has redefined the genre with their music. The musicians have given some of the heaviest and most powerful metal songs. These include Land of Confusion, Inside the Fire, Another Way to Die, The Vengeful One and The Light. All of these tracks topped the Mainstream Rock chart. They have also won four Loudwide Music Awards. On January 27, 2020, they announced that they are going on tour to celebrate the 20th Anniversary of their record, ‘The Sickness.’ This trek will have them travel to several North American cities. So, if you want to rock out with them live then simply get your hands on Disturbed tickets today.

Tickets for Disturbed are currently unavailable. 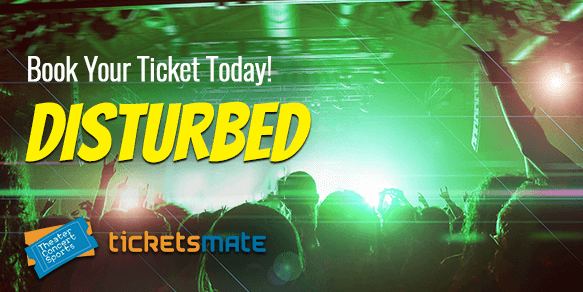 The heavy metal giants Disturbed have proved to be the master of their craft by spawning one hit record after the other. They are widely famous for their single, The Sound of Silence which not only became a number-one hit but was also certified triple platinum by the RIAA, becoming their first track to achieve this feat. They are now embarking on an extensive summer tour. So, will you be there when they make their stop in your city soon?

In early 2020, the lead vocalist of Disturbed David Draiman was interviewed by Brent Porche of the Philadelphia radio station 93.3 WMMR. During the interview, Draiman talked about the group's upcoming North American tour and also shared his thoughts regarding the passing of the legendary Rush drummer, Neil Peart. He stated, "There's no way to overestimate the impact of the loss of such an individual."

Porche also asked Draiman about his thoughts of becoming eligible for Rock and Roll Hall of Fame in five years. He responded, "It's every musician's honor and dream to be included. Who knows? I don't think we can hinge our hopes on something like that."

Disturbed is going to have a really busy year. The band is scheduled to perform at multiple festivals including Rock Am Ring, Download Festival, Nova Rock, Pinkpop and Tons of  Rock. In addition, they will be headlining four major festivals, Epicenter, Welcome to Rockville, Rockfest and Upheaval.

On January 23, 2020, Disturbed put out the music video of their single, Hold On to Memories. It has crossed over one million views on YouTube. The song featured on their most recent release, 'Evolution' which came out on October 19, 2018. The record landed at the first spot on the Top Alternative Albums chart.

On January 27, 2020, Disturbed announced to tour in celebration of the 20th Anniversary of their debut album, 'The Sickness.' The guys are scheduled to kickoff the trek on July 15, 2020. Their first concert will be performed in Maryland Heights. They will then go on to make their stop in several cities before ending the trek on September 12, 2020. This is your chance to watch them perform so, grab these Disturbed tickets and rock out with them live.

How to Buy Disturbed Tickets?