The dynamic duo, Dan and Shay, are making waves around the world with their debut album, Where it All Began. Their hit single, “19 You +Me” is doing pretty well on the Country Airplay and Hot Country Songs charts. The country artists have already made a name for their selves in a highly competitive industry and have signed contracts with Warner Bros Records. You now have a chance to catch this talented duo live in concert. All you have to do is get is your Dan and Shay tickets before they run out. 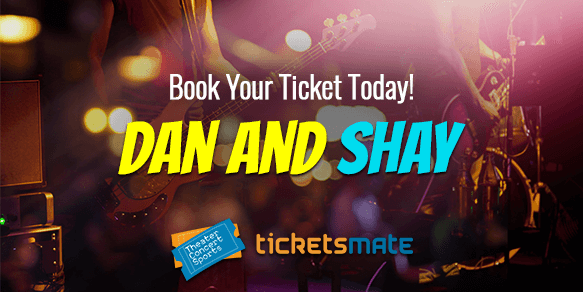 Dan Smyers and James Shay Mooney met in Nashville, Tennessee in December 2012. The first song that they wrote together was Put on Hold for Rascal Flatts. After two months they started receiving multiple offers from publishers, and then decided to sign with Warner/Chappell Music. On October 2013, Dan and Shay released their debut song, “19 You +Me” with Danny Orton. It received great reviews from the masses and Taste of Country, who praised it for its emotional and warm feel. Approaching the current trending style of country pop music, Dan and Shay consistently provide relatable lyrics throughout their album. Their first track, “Show You Off,” features a soft melody. The best part of the number is the melodious whistling which sets a romantic tone for the song.

“Stop Drop + Roll” is a catchy track which you will not be able to stop humming all day after listening to it. The synchronization of voices during the chorus of the song comes off as a pleasant surprise. This is a perfect track to listen to while driving.

The melodious track “What You Do To Me” is a foot tapping number. The rhythm of the piano engages the listener and compels them to sing along with the catchy lyrics. This song is quickly making its way to the top country charts around the globe.

“Can’t say no” brings a twist to the album with its purely pop style. The acoustic guitar playing in the background shows that Dan and Shay are masters of both pop and country genres of music. The song “First Time Feeling” is sung in a signature country style. The lyrics have a nostalgic feel to them, focusing on the emotions of young love.

The band’s willingness to create diversity in their music is represented in the song, “Nothin’ Like You.” Introducing a touch of pop rock, this track serves as a refresher with electronic drums and lead guitar playing along. “Somewhere Only We Know” and “Parking Brake” are similar songs, with the later serving as a continuation to the lyrics of the former. With their clean cuts and expertly utilized technical production, the songs have an overall good feel to them.

The song about heartbreak, “I Heard Goodbye” brings out all the emotions in the listener. Dan and Shay’s aim to touch the hearts of their audience is achieved through this number. “Party Girl” is a highly relatable song about what happens when you attend a party. The band closes with the perfect track, “Close Your Eyes,” which surprises you by giving you a hint of modern folk music. The number creates a relaxed aura for the listeners with its catchy train beat.

Dan and Shay’s debut album serves as a way to know them personally. Their heartwarming lyrics and sweet take on young love pulls at the heart strings of the audience. Emerging as inspired songwriters and vocalists, their nomination at the Academy of Country Music Awards does not come as a surprise. Let Dan and Shay take you to a harmonious journey that will leave you spell bound. This will no doubt be the perfect way to spend a romantic, fun filled night with your loved ones.

The much-awaited Dan and Shay Tour 2021 is almost here! Fans waited for quite a long time to see the country pop duo and now their wait is coming to an end. Dan and Shay Tickets are now available for their performances stretched over the entire year, so you have plenty of opportunities to catch them live in concert. Their upcoming performances include festival appearances and series of concerts that begin from June and will go on till the end of year. The epic Arena Tour that was to happen in 2020, but was postponed due to the corona virus will now kick off September 9, 2021, in Greenville, South Carolina with performances in all major cities including Chicago, New York, Salt Lake City, Atlanta and Dallas. The trek wraps up on December 7 with a performance in Boston, Massachusetts.

DAN AND SHAY NEWS AND UPDATES

How to Buy Dan and Shay Tickets?

Nothing beats the joy of watching your favorite music artist perform live! Dan and Shay's concert dates are out and fans are looking forward to the upcoming shows. The next concert will be held in Durant at the Choctaw Casino & Resort - Durant on 6-Aug-21, while the last available date is for the event scheduled for Boston at the TD Garden on 7-Dec-21. For complete information regarding dates and venues, please visit our website.

Q:Are you selling Dan And Shay Tour Tickets for their Atlanta concert?

A:We sure are. Dan And Shay Tickets are available for the country duo's March 1, 2021 concert, taking place at the Coca-Cola Roxy. Currently the average ticket price for the concert you want to attend is $177 and the minimum get in price is $96. The headlining tour will also feature Morgan Evans as the supporting artist.