Led by the supremely talented singer-songwriter Tommy Vext, Bad Wolves has quickly built quite a reputation in the heavy metal community. In just a matter of few years, they have not only played sold out concerts in American and European countries but given many epic hits including Sober, No Masters and Learn to Live. The guys are now scheduled to perform at many famous festivals this year including, Rock USA Festival, KFMA Day Festival, Rocklahoma and Rock Fest. In addition, Bad Wolves has announced to tour with Hollywood Undead and Disturbed on their respective tours. This is your best chance to watch them do what they do best. So, book your Bad Wolves tickets and enjoy their show live. 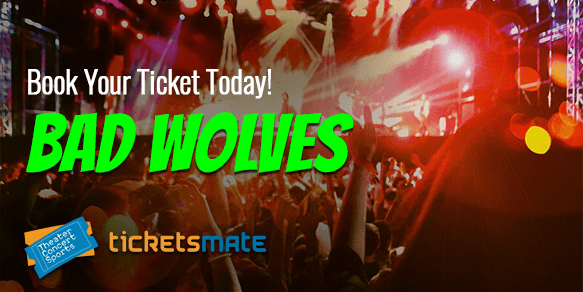 Bad Wolves have achieved a lot of popularity in very little time. Since their debut, they have performed with some of the biggest acts in the industry like, Nickelback, Five Finger Death Punch, Papa Roach, Breaking Benjamin and Shinedown. The group is now returning to the road and will be playing many memorable shows across North America. So, will you be there in attendance when they take the stage in your city next?

Bad Wolves caught the attention of the heavy metal fans in 2018. It was the year they released the cover version of The Cranberries’ smash-hit single, Zombie. The song intended to feature the iconic vocals of Dolores O'Riordan but she unfortunately passed away prior to recording it. This single became Bad Wolves’ first song to peak atop the Mainstream Rock chart and was certified platinum in the United States.

In October of 2019, Bad Wolves put out new music in the form of their sophomore studio album, ‘N.A.T.I.O.N.’ The record tasted moderate success on the music charts, landing at the 78th spot on the Billboard 200 and was loaded with twelve hard-hitting songs. This LP also yielded a single, Killing Me Slowly which turned out to be their third song to debut at the top of the Mainstream Rock chart.

Hitting the Road with Hollywood Undead

Bad Wolves are all set to embark on a special tour with Hollywood Undead and will be performing a number of shows across the United States. They will be performing the first show of the trek together at the Clyde Theatre in Fort Wayne on May 05, 2020. These two bands will then go on to play shows in Chattanooga, Huntsville, Milwaukee, Grand Rapids and Sioux Falls before Bad Wolves ends the run with them on May 24, 2020.

After performing their last show with the Hollywood Undead, Bad Wolves will take a break for a while before they return on the road again with Disturbed. The group will play the first concert with them in Maryland Heights on July 15, 2020. They will be concluding the trek on September 12, 2020. Bad Wolves tickets for their upcoming shows are available right now. So, get them early if you want to experience their concert live.

How to Buy Bad Wolves Tickets?

Nothing beats the joy of watching your favorite music artist perform live! Bad Wolves's concert dates are out and fans are looking forward to the upcoming shows. The next concert will be held in Council Bluffs at the Westfair Amphitheater on 5-Jun-21, while the last available date is for the event scheduled for Salt Lake City at the USANA Amphitheatre on 31-Aug-21. For complete information regarding dates and venues, please visit our website.