Aventura is the band that promises a sizzling hot performance each time it walks into the stage. All the live Aventura shows can be called unforgettable because of their energy and music. They bring such energy to their concerts that the audience instantly gets into the party spirit. There are hardly any bands in bachata or tropical genre that are as popular as Aventura. Over the span of their sixteen year in music industry, they have ruled the hearts of their fans with their fun music and touching lyrics. When the band was originally formed, most of the band members were in their teens. They have journeyed from boyhood to manhood right in front of their fans who have grown to love and respect them. Since the boys of the band have known each other for a very long time, they have discovered the trick of partying hard. That is why, each and every Aventura concert is an unforgettable treat for their fans. 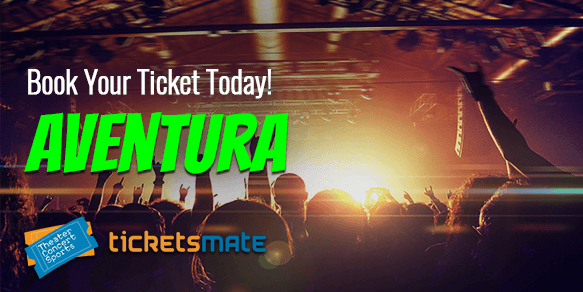 The Bronx based band has brought a new energy into R & B and Latin pop music. Their new style has influenced the bachata genre immensely and has taken it to the next level. Their self taught technical style has set them apart from other bands of the genre and has contributed to their popularity. That is why, with every passing year, more and more people are joining the Aventura fan base. This has already made them a mainstream Latin pop act and if it continues at the same rate, their fame would be unprecedented in the future. The band members still share the same passion for music, which they did when they started off. And that shows in the music and live show of the band which remain extremely electrifying concert performances.


When the band began first, they called themselves The Teenager. The name was then changed to Aventura and it has been the band name ever since. Even though they were busy in making music in the early 1990s, they did not get their big break until 1999. That was the time when they broke the norms of traditional Dominican bachata genre and produced their own new version with bachata and hip hop fusion. This innovation gave the band a much need boost. As a result, they gained popularity not only amongst the traditional bachata music listeners but also the hip hop, r & b fan base, increasing their fame. Their bold experimentation has earned them a fierce reputation amongst their fellow musicians as well.

As for their fans, they always expect new and exciting things from the stars of Aventura.
Aventura has produced five well-received albums till date. During their career span of over fifteen years, their music has considerably matured. Their initial hit albums brought new trends in the Latin pop culture. Their debut album Generation Next, which was released in late 1999, was very well received. The album featured twelve tracks, from which Cuando Volverás was one single which made to bachata charts. This album game them the reputation of carefully preened four good looking who can sing and dance like nobody’s watching. This was all they audiences needed which was thirsty for new talent.

The talented stars of the band Anthony Romeo Santos, Max Santos, Henry Santos Jeter and Lenny Santos, over time have become star performers especially when it comes to their live performances. Although, all of their recorded albums sound great but the band never ceases to give it a tad bit different touch in just about any given live show of theirs. That is one of the things that bring the fans back to their concerts year after year. If you too are such a fan than grab your Aventura Tickets and have some real fun by listening to them LIVE!

Latino Legends Aventura come together for 2020 US Inmortal Tour. Ever since they dropped the single “Inmortal” from Romeo Santos’ fourth studio album Utopia, it left the fans wondering of a possible reunion. Then followed a few performances which reinforced the speculations and now they finally gave the breaking news of a tour which will mark their first one together since 2009. The award-winning bachata superstars released five albums together before Santos embarked on a successful solo career. Romeo Santos, Lenny Santos, Henry Santos and Max Agende Santos will make a stop at seven US cities kicking off the trek on February 6 at the Forum in Los Angeles. The trek comes to an end on Tuesday, March 10 in Miami’s American Airlines Arena. Get Aventura tickets to catch the kings of bachata live in concert and enjoy hits like “Ella y Yo,” “Por Un Segundo” “Dile Al Amor” on the upcoming trek.

How to Buy Aventura Tickets?

Q:How much do Aventura tickets cost?

A:The Kings of Bachata, Aventura are heading out on their first US tour in 10 years. The legendary artists have announced 7 dates so far, Aventura Tickets for which are now available. The Inmortal Tour is already raking in a huge demand and the tickets price at the moment is averaging between $301 (cheapest) to $448 (the most expensive).

Q:Can you tell me the exact date for the concert and also if you have Aventura providence tickets?

A:Kindly check our Aventura section for details and the availability of the tickets as well.